Monitoring an UrbanCode Deploy server (sometimes more in HA setups) and it's agents requires keeping track of resource utilization multiple environments, the UrbanCode deployment server(s) itself and the linkages between (ie. the network).


In addition to resource utilization, log files should also be monitored for abnormal activity and traffic. There are commercial offerings which do these types of things but since UrbanCode Deploy itself is a deployment solution, it can be used to deliver monitoring to nodes. All that's is needed is monitoring agents and a collector and a means to configure and connect it all together.

In this post I'll demonstrate a quick bootstrap solution for system and JVM resource monitoring using UrbanCode Deploy. It will provide an "out of the box" monitoring dashboard solution, Grafana from data stored in Graphite (running in a Docker container) of metrics collected by collectd that installed on nodes using a Chef recipe that's deployed through UrbanCode Deploy. The end result looking something like this:


For the time being this solution is solely for a Linux environments (RHEL, Ubuntu and variants) but this solution can be adapted to other OS's as many of the components have counterparts for Windows, AIX and other OS's.

So how do we get there? Well, one approach is to set it up manually, quite an operation if you have 1000s of agents, so we'll need to do better.

First, the assets need to be installed.


Once the solution is installed all that needs to be done is to execute the process on UrbanCode. Yes, it's that easy.

Go to the Process Tab in UrbanCode Deploy Server, Click on Run Next to the "Install_collectd" process.

A dialog will popup asking for a series of parameters. These will be explained in more depth in a later post regarding the Chef recipe I created. (You can find it here) 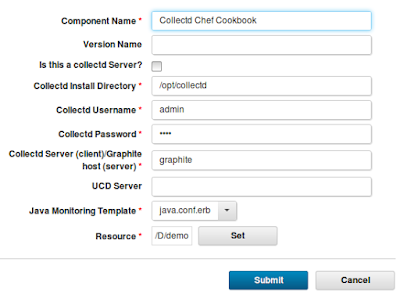 Once you click Submit, this should happen:
At this point, all the collectd daemons should be started and collecting. Navigate to the docker host at http://<Docker host>/. You should see a tree with metrics, like this: 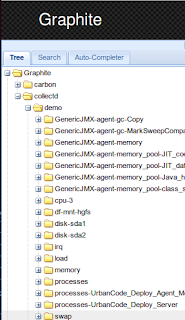 You can also navigate to Grafana at http://<Docker Host>/grafana. Note that the username and password for both Graphite and Grafana are admin/admin.

This is quite a mouthful for one blog post and there are so many aspects to cover such as:

I will cover these in subsequent postings. In the meantime, try to set it up and see how it goes. If you're lucky, you end up playing with some cool metrics and graphs in Graphite/Grafana.
Posted by Unknown at 17:37