I was considering making this a part of the "Monitoring UrbanCode Deployments with Docker, Graphite, Grafana, collectd and Chef!" series but as I didn't include this in the original architecture so it would be more to consider this an Addendum. In reality It's probably more of a fork as I'll may continue with future blog postings about the architecture herein.

One of the issues I ran into right away while deploying the monitoring solution described in "Monitoring UrbanCode Deployments with Docker, Graphite, Grafana, collectd and Chef!" into an internal topology managed by UrbanCode Deploy was that each of the agent host machines had quirks and issues that required me to constantly tweak the monitoring install process. Fixing yum and apt-get repositories, removing conflicts, installing unexpectedly missing libraries, conflicting JDKs.
The reason for this is that each machine was installed by different people who installed the operating systems and the UrbanCode Deploy Agent in different ways with different options. It would of been great if all nodes were consistent, it would of made my life much easier.


Fantastic, I can create a blueprint of the desired topology, add a monitoring component to the nodes that I wish to have monitored and presto!  Here is what the blueprint looks like in UrbanCode Deploy Blueprint Designer:

I created three nodes with three different operating systems just to show off  that this solution works on different Operating Systems. (it also works on RHEL 7 but I thought adding another node would be overdoing it a little as well as cramming my already overcrowded RSA sketches).

This blueprint is actually a Heat Orchestration Template (HOT). You can see the source code here: https://hub.jazz.net/git/kuschel/monitorucd/contents/master/Monitoring/Monitoring.yaml

So if we modify the original Installation in Monitoring UrbanCode Deployments with Docker, Graphite, Grafana, collectd and Chef! Part 1, it would look something like this:

Ok, let's take a time out and talk a little about how this all works. First what's Heat?
Heat is an Orchestration engine that is able to call cloud provider API's, and other necessary APIs to actualize the resources that are specified in yaml into a cloud environment. Heat is part of the OpenStack project so it "natively" supports OpenStack Clouds but can also work with Amazon Web Services, IBM SoftLayer and any other cloud provider that is compliant with the OpenStack interfaces required to create virtual machines, the virtual networks, etc.

In addition, Heat can be extended with other resource types like those for UrbanCode Deploy Components that allows them to be deployed into Environments provisioned by OpenStack via Heat using the Heat Orchestration Template (HOT) specified during a provisioning.

The UrbanCode Deploy Blueprint Designer provides a kick ass visual editor and a simple way to drag drop UrbanCode Deploy Components into Heat Orchestration Templates (HOT). It also provides the ability to connect to a cloud provider (OpenStack, AWS and IBM SoftLayer are currently supported) and deploy the HOT.
You can monitor the deployment progress.
Oh, it also uses Git as a source for the HOTs (yaml) so that makes it super easy to version and share blueprints.

Ok, let's go over the steps on how to install it. I assume you have UrbanCode Deploy installed and configured with UrbanCode Deploy Blueprint Designer and connected to an OpenStack Cloud. You can set up a quick cloud using DevStack.

I am not going to cover the UrbanCode Component Processes as they are essentially the same the ones I described in Monitoring UrbanCode Deployments with Docker, Graphite, Grafana, collectd and Chef! (Part 2: The UCD Process) and Interlude #2: UCD Monitoring with Windows Performance Monitor and JMXTrans. The processes have been reworked to be executable using the application/component processes rather then solely from Resource Processes (generic). I also added some steps that do fix of typical problems in OpenStack images, such as fixing the repository and a workaround for a host name issue causing JMX not to bind properly.

The blueprint is also rudimentary and it may need to be tweaked to conform to the specific cloud set up in your environment. I created three virtual machines for Operating System images I happed to have available on my OpenStack, hooked them together on the private network and gave them external IPs  so that I can access them. They all have the Monitoring Component added to them and should be deployed into the Monitored Application.

Once you've fixed everything up, make sure you select a cloud and then click Provision...:

It will now ask for launch configuration parameters, again, many of these will be specific to you environment but you should be able to leave everything as is. 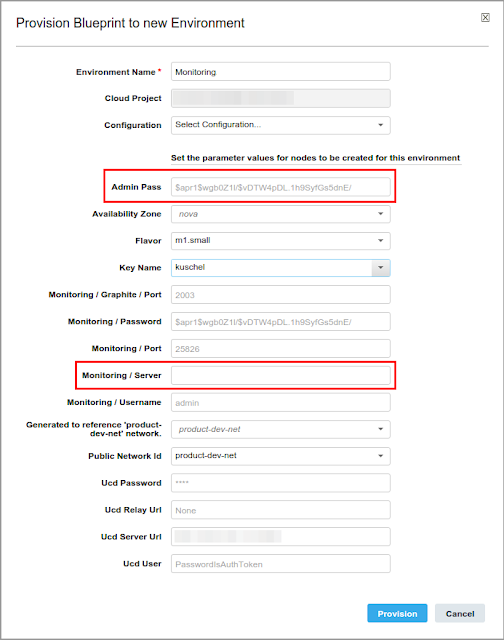 If you bound the Docker container to other different ports you'll have to change the port numbers for graphite (2003) and Docker (25826).
You will need to set the Admin Pass to something recognizable, it's the Windows Administrator Password. You may or may not need this depending on how your windows image is set up. I needed it.
The Monitoring / Server is the Public IP address of your Docker host running the bkuschel/graphite-grafana-collectd image. The Monitoring / Password is the one the is built into the Docker image. You will need to modify the Docker image to either not hard code this value or build a new image with a different password.

Once Provision is clicked, something like this should happen:

The progress can be monitored in UrbanCode Deploy Blueprint Designer:

Once the process is finished the new topology should look something like this:

That should be it, give it a shot. Once you got it working the results are quite impressive.  Here are some Grafana performance dashboards for CPU and Heap based on the environment I deployed using this method. The three Monitoring_Monitoring_<ip> correspond to <UrbanCode Deploy Application>_<UrbanCode Deploy Component>_<UrbanCode Agent Host Name>:

Hers are some related topics that I am considering for future posts:
Posted by Unknown at 11:16